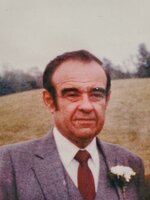 Peacefully on Saturday, June 11, 2022, after a lengthy illness. Predeceased by his wife of 50 years Georgina (nee Haire), his late brother and sister-in-law Michael and Gertrud (nee Seidler) and his late sister Olga (Frank Sigmund surviving). Survived by his children Christine (the late Don), Kathryne (Ron) and Harry (Lucy) and many grandchildren, great grandchildren, nieces, and nephews.

Born in Windsor in 1929, John moved to Ottawa shortly after marrying his wife, where he was a teacher for many years Glebe Collegiate and High School of Commerce, retiring with the Golden Handshake. John then ran a tuck shop on Riverside Drive for a few years before finally settling into retirement.

Later in life John enjoyed many outings and events with his good friend Dorothy Milton, and his local Seniors Investment Groups.

If you wish to send flowers, the family asks that they be sent directly to Pinecrest Cemetery. Donations can be made to the Heart and Stroke Foundation in his memory.