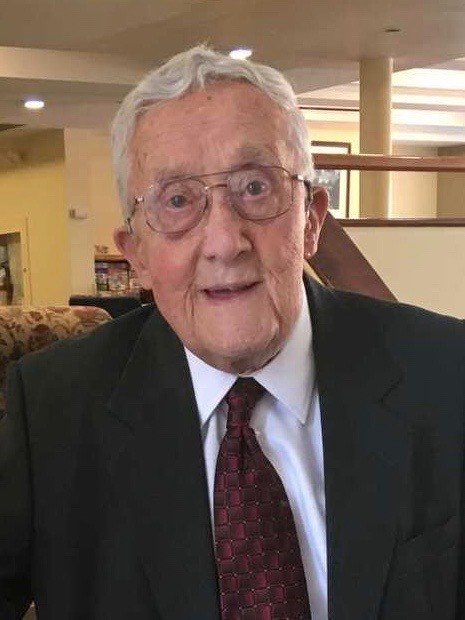 It is with profound sadness that we announce the passing of The Reverend Canon Leonard J. Baird.  He passed away peacefully on Friday, January 8, 2021 at the Ottawa Civic Hospital just two months shy of his 101st birthday.  He was predeceased by his beloved wife, Gene Marston (Adams) Baird, in May of 2017 after almost 69 years of marriage.

Born and raised in Carleton Place, Ontario, Leonard was one of three children of Alma and Alvin Baird.    He was predeceased by his brother Denzil (Mary Jean); his sister, Bernice (and The Rev. Canon Francis Gooch); a niece and nephew, Kathryn and Peter Gooch.

Leonard studied theology at Bishop's University in Lennoxville, Quebec.  Following his graduation in 1946, Leonard's first posting was assistant at St. John's Anglican Church in Smiths Falls. He was then  moved to St. Alban's in Mattawa.  He was also rector of St. John's in Port Hope.  In Ottawa he was the assistant at St. Matthew's and rector of St. George's and St. Peter's. He retired in 1985 after 17 years of faithful service at St. Thomas the Apostle.

Leonard was an exemplary, loving, devoted and much cherished family man.  Left to mourn his loss are his four children:  Elizabeth (Gary), Michael (Ann), Stephen (Diana) and Angela; his grandchildren:  Jennifer, Alexa (Ben) and Amanda, and his great grandchildren, Joshua and Ashley.  He was a caring uncle to Sylvia Baird (Dan Brazeau) and Dave Gooch (Cathy).

Leonard was a true gentleman whose sense of humour will be missed as it provided for many entertaining gatherings!  He was a modest, considerate and genuine man who lived his life by example.  Leonard will be greatly missed, fondly remembered and loved forever.

In lieu of flowers, memorial donations to a charity of your choice would be very much appreciated by Leonard's family.  A private family Graveside Service will be held at a later date.

Share Your Memory of
Leonard
Upload Your Memory View All Memories
Be the first to upload a memory!
Share A Memory
Send Flowers