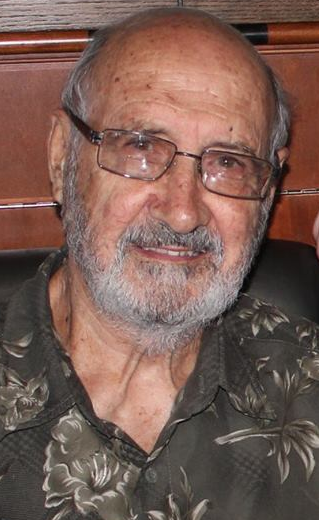 It is with great sadness and broken hearts, that we announce the sudden passing of our beloved Husband/Father/Grandfather/ Great-Grandfather, Gordon Alexander Moir.  His courage, strength and stubbornness kept him healthy, strong and fiercely independent, right up until the last weeks of his life.  He fought hard until the end.

Born in Glasgow, Scotland to David and Jean (Haymarch) Moir, he was the baby in a family of 6 boys.  His brothers, John, David (died in infancy), James, Bruce, and Corson, were always his heroes.  He watched as most of them went off to war and couldn't wait for his turn to enlist.  However, the war ended right before he could.

The family immigrated to Canada the first time when Gordon was just 2 years old.  A few years later, they returned to Scotland, but only briefly.  They finally made their decision to settle in Canada permanently.  Eventually, 109 Goulburn Ave. in Sandy Hill became the family home for years to come.

Gordon met the love of his life, Ruth Legacé in 1947 and dated for 8 years before marrying on October 15th, 1955.  They lived a beautiful and happy married life for 66 years.  Family was everything to him.

He leaves behind his beloved wife Ruth, daughters Cindy (Keith) and Debbie (Dan) and son Michael.

Gordon worked from a very young age, doing anything he could to be employed.  We believe this is where his drive for hard work and an exceptional work ethic was created.

His career with Loblaws spanned decades and included many cities in Canada.  The family settled in Toronto for many years.  When his Loblaws days were over, he moved his family and returned home to Ottawa, where his dream of owning his own Grocery Store came true.  Working alongside Ruth and all 3 children, the family created yet another "family" within that store.  All employees became part of 'the Moir's' and until this day, look up to, respect and admire this man, Gordon Moir, as their father figure and friend, for all he taught them and brought to their lives.

Retirement from Moir’s Groceteria Inc. was exceptional and beautiful.  He and Ruth were by then blessed with 5 beautiful grandchildren, Kimberley (Edward), Stephanie, Michael (Kayla), Tyler (Ashley) and Joshua (Laura).  Countless family gatherings and celebrations were shared and enjoyed over the years.

Holidays, vacations and the best of times, spending time all together for endless summers by the pool on Beaver Ridge. Then, when he thought life couldn’t get any better, great-grandchildren came into the picture.  Quinton, Cooper and Benjamin became the next generation to enjoy this precious life we shared and all the beautiful and countless memories we have made, together.  This is what made Gordon Moir the happiest of men.  Family.  And his family is Gordon's greatest legacy.  All his family carry a part of him that he so lovingly instilled in us.

In lieu of flowers, a donation to the Ottawa Humane Society in Gordon's honour would be appreciated.

Celebration of Life to be held at a later date.

Share Your Memory of
Gordon
Upload Your Memory View All Memories
Be the first to upload a memory!
Share A Memory
Send Flowers