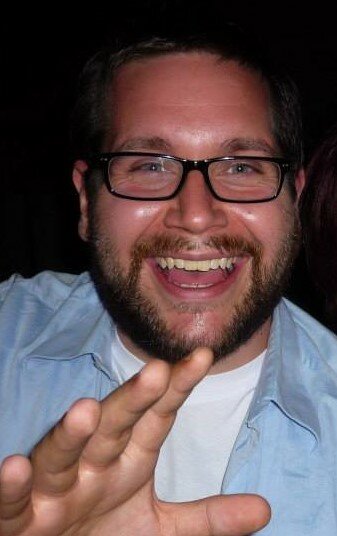 Ed Staples was a loving husband to Karen Charbonneau, a wonderful son to Renee and D (Charles and Irene Staples), BFF brother to Stephen Staples, brother-in-law to Rose Ann Cotter, and uncle to Liam Staples.  A private service will take place at Pinecrest Cemetery on February 12th, 2022. Born on January 18th, 1983, in Ottawa to loving parents, Ed Staples immediately filled the lives of those around him with joy.  Ed grew to be quick-witted, charming, and humorous. Insightful, and kind to a fault, Ed had a velvet voice that would inspire and move all those it reached. Ed was elected class Valedictorian by his peers at Canterbury High School in 2002 and went on to major in Film Studies at Carleton University.

During his short time with us, Ed Staples was a dynamic creative force who leaves this world richer than when he arrived.  Some of the many hats Ed wore were friend, son, brother, husband, uncle, playwright, Actor of both film and stage, radio DJ, horror film studies teacher, cat whisperer, motivational speaker, grocer, karaoke crooner, community builder, live streamer, blogger, confidant, movie critic, music enthusiast, and proud front line hospital worker during the COVID 19 Pandemic.  Ed Staples was a bright spark in this world and will be deeply missed by many. Donations on Ed’s behalf can be made to the Ottawa Humane Society, CKCU & The Ottawa Heart Institute Foundation.

Share Your Memory of
Edward
Upload Your Memory View All Memories
Be the first to upload a memory!
Share A Memory
Send Flowers