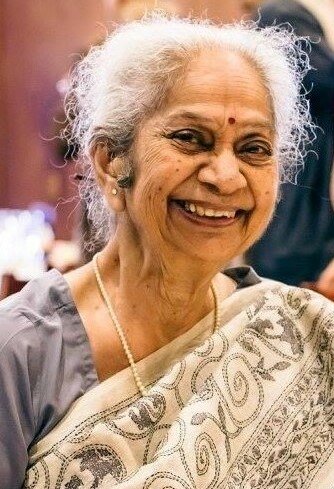 Benu passed away on Sunday, February 6th, at the age of 91 at the Civic Hospital, Ottawa, after a brief illness, with family at her side.  Predeceased by her husband of 34 years, Biswa Nath in 2004, she was a loving mother to Amit (Jeea) and a proud grandmother to Kiran and Ashok.

Benu led a rich and fulfilling life.  Born March 8, 1930 in Bhagalpur, India, the fourth of six children, she lost her mother at a young age and helped care for her brothers and sisters growing up through the turbulent years of World War 2 and Indian independence.  Her family highly valued education for their daughters. Benu earned two graduate degrees, a Master’s in English Literature and a Master’s in Sociology. She taught English for many years at both the secondary and college level, and her students loved her very much. In 1967, she returned to Bhagalpur to care for her father before moving to Canada in 1970 to marry Biswa Nath and begin a new life. They settled in their home near the Experimental Farm in Ottawa, Canada, where she lived until a week before her passing.

After Amit was born, as a family, they traveled far and wide to South Africa, South America, Europe, China and Japan for Biswa Nath's work. Later, Benu was overjoyed to welcome Jeea into the family when she married Amit.

Benu loved her family and her home above all else. When not globetrotting, she could be found writing, reading, tending to her beautiful garden, participating in AquaFit classes with her friends at the Dovercourt pool or knitting complicated sweaters. After the passing of her husband she remained the centre of family life, whether it was Thanksgiving get-togethers or Bhai Pohnta pujas.  She adored her grandchildren beyond measure, sharing with them her love of music and literature, teaching Kiran how to knit and making Ash his favourite Bengali sweets. In more recent years as her dementia progressed she lost much of her ability to communicate, but she never stopped showing her love. The family is grateful to her caregivers for taking such good care of her, and to the extraordinary staff of the Civic Hospital. We invite family and friends to join us via livestream on Sunday, February 13 at 11 a.m. Please click here Funeral Service Link.  In lieu of flowers, please consider a donation to the Dovercourt Recreation Centre.

Share Your Memory of
Benu
Upload Your Memory View All Memories
Be the first to upload a memory!
Share A Memory
Send Flowers