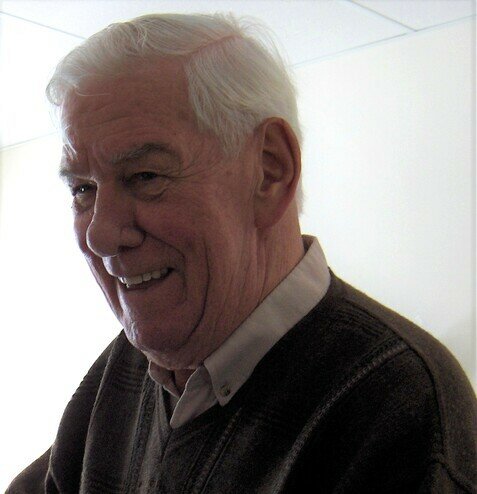 Charlie Helmes (b. May 20, 1928) died Thursday, April 14, 2022, after a week in palliative care at the Civic Hospital in Ottawa. He had been in decline for months but, true to form, maintained his warmth and good spirits right to the end.

He had a difficult childhood because his father, Charles Senior, died suddenly in 1934, at the height of the Great Depression. No life insurance. No savings. Charlie was just five years old. His mother, Myrtle, was left to raise him and his older sister, June, then twelve, on her own. Myrt was a warm, strong-willed, principled, resourceful woman who, through hard work, made a good home for them. Charlie was very close to his mother – he called her “Ma” – and kept in close touch with her throughout her life. Charles Senior and Myrt had moved the family to the village of Sydenham, just north of Kingston, a few years earlier and, despite the challenges caused by their difficult financial situation, Charlie told many stories about a happy, Tom Sawyeresque childhood - swimming in the mill pond and lake, playing hockey, sledding, camping, and biking. But he learned lessons about hard work and contributing to the family early on. By the age of eight he was earning money by hauling water, ashes and coal, stacking firewood, etc. for people in the village. Then, as a teenager, he worked at the village gas station after school and on weekends to help make ends meet.

After high school, he moved to Peterborough and started working at Quaker Oats. He soon demonstrated his work ethic and organizational skills and was promoted into the accounting department. This led him to return to school. While working full-time, he earned an accounting designation via correspondence from Queen’s University. Shortly after moving to Peterborough, he met Helen Duncan, a Peterborough native. They married in 1949. Two years later, they started a family and eventually had four children: Rick, Geoff, Melanie and Kyle. Charlie left Quaker Oats two years later to take an accounting job with Mead-Johnson and then, in 1962, moved to Ottawa to join the federal civil service in Ottawa. He loved working in the civil service and had a long, rewarding, and productive career, eventually rising to be a Director-General of Labour Canada. However, his marriage to Helen was not a happy one and eventually, after nearly thirty years, they divorced.

A new and much happier chapter in his life began when he met and, in 1984, married Doris Conrod. Doris and Charlie were soulmates, seldom apart. Doris had three children from a previous marriage – Bev, Sharon, and Dale – and so the marriage created a large, blended family. Charlie and Doris loved to entertain. Doris was a superb cook, Charlie liked to eat, and their home soon became the social centre of the family. And they were frequent back-and-forth visitors with his sister, June and her husband, Russ, and the rest of the Wolsey clan in the Kingston area.

They enjoyed a long, happy, and busy retirement with family and friends. Charlie loved music, especially big band and light classical music, was an excellent bridge player, and loved to work in the yard. As well, he and Doris became fervent golfers and they played regularly for many years.

Charlie was especially good with children. He loved kids and was the quintessential grandpa who would play games, do puzzles, and read stories. He was always happy to see his older grandchildren as well, listening to their stories and problems, offering advice and support, encouraging them to be positive. Near the end of his life, when asked, Charlie said he was satisfied that he had lived a good and full life and had few regrets. He was proud of his career and really treasured the close relations he had with his family. He said he wasn’t afraid to die because he knew he would be remembered with love. He was right.

Thank you to the caring doctors and nurses of The Ottawa Hospital, Civic Campus, that provided such excellent and compassionate care to Charlie in his final days. For those who wish, donations to The Ottawa Hospital Foundation, would be greatly appreciated in lieu of flowers.

A private family ceremony will be held at Pinecrest Remembrance Services.

Share Your Memory of
Charlie
Upload Your Memory View All Memories
Be the first to upload a memory!
Share A Memory
Send Flowers