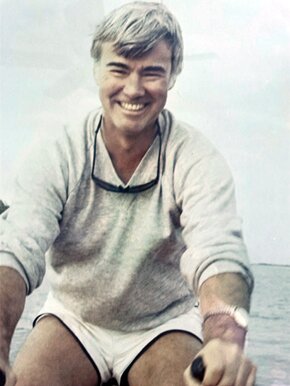 It is with great sadness that we announce the sudden passing of Charles Edward “Ned” Hanlan of Ottawa. He passed away on May 8, 2022, at the age of 86 at the Queensway Carleton Hospital.

A civil engineer, Ned graduated from Ellis Hall of Queen’s University in 1959 and spent most of his career working for CC Parker and Associates where he was involved in constructing the Portage Bridge, the Cornwall Marina and the rebuilding of the historic Pretoria Bridge. As a young man, Ned attended the Galt Collegiate Institute and was a member of the Galt community for many years. He possessed a strong work ethic and spent his leisure time at the cottage, travelling, sailing on the Upper Rideau Lake, fundraising for Cub Scouts, and volunteering for the Schizophrenia Society. Ned and his wife Mary were long-time advocates for mental health in Ottawa and opened their home to those suffering from mental disabilities. His warmth and awareness for others touched many lives.

Friends and family are invited to a graveside ceremony at Pinecrest Cemetery on Saturday, June 4, 2022 at 11:00 am, 2500 Baseline Road, Ottawa. In lieu of flowers, the family asks that you donate to a charity of your choice in Ned’s name.

Share Your Memory of
Charles Edward "Ned"
Upload Your Memory View All Memories
Be the first to upload a memory!
Share A Memory
Send Flowers