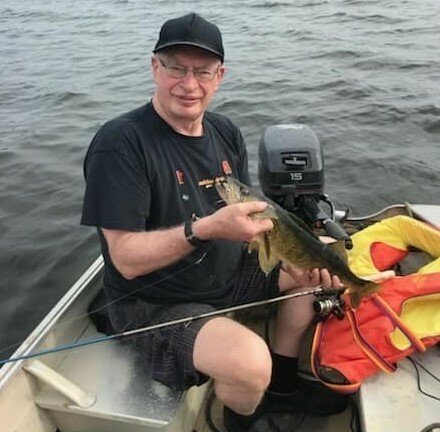 Fred was a devoted husband, father and grandfather who cherished his family deeply.  He became a father figure to all who cared for him. He was an all inspiring man, always willing to share his knowledge with those who were ready to listen.  He supported his family through every endeavor striving for a healthy lifestyle of fitness, balance and learning.  He was always willing to assist wherever he was needed, whether fixing something, giving advice or saving the day.

There are so many words to describe him; gentle, reliable, honourable, a great judge of character and a true leader who guided those around him, knowing when to make a suggestion and when to let them learn their best way.

He was raised in rural Ontario on the family farm.  As the oldest child, he took an integral role in all aspects of the operations.   He learned to think outside the box and planned for all possible outcomes in every situation.

He worked for 39 years at Carleton University as a lab technician where he shared his knowledge just as much as he learned from those around him.

He will be greatly missed by his family including his wife of 51 years, Brenda, daughters Corrie (Jim Fagan), Tracy (Pat Donahue) and Bonnie (James Demaine).  Proud Grandpa of Morgan, Ella, Charlotte and Jordyn. Son of Florence and the late William Cassalman.  Brother of Allan (Yvonne) and Glenn (Darlene) and predeceased by David.  He is survived by his chosen brother Chris Cassalman as well as many nieces, nephews and cousins.

His family will receive friends at Woodvale Pentecostal Church, 205 Greenbank Rd, Nepean on Saturday, September 17th from 10:00 A.M until time of the Celebration of Life Service at 11:00 A.M. followed by a reception.

For those wishing, donations may be made to the Heart & Stroke Foundation of Ontario, the Canadian Cancer Society or to a charity of one’s choice.

Share Your Memory of
Fred
Upload Your Memory View All Memories
Be the first to upload a memory!
Share A Memory
Send Flowers