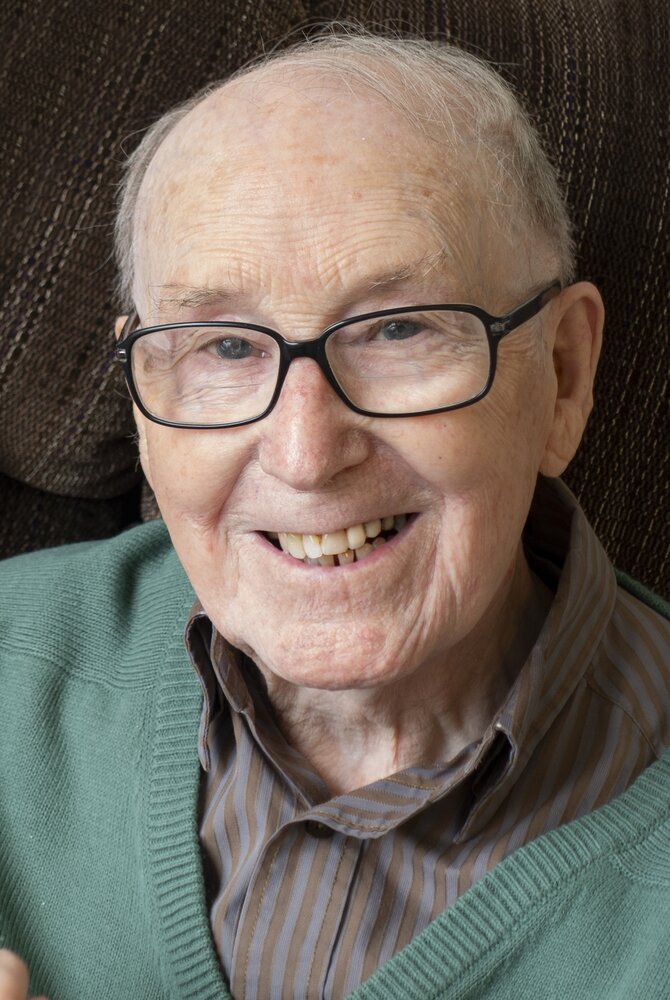 Loving husband of Isobel and devoted father of Moira, Patricia (Mike) and Michael (predeceased). Dear grandfather of Olivia and Dexter. Predeceased by brother William and sister-in-law Eileen (Australia). Sadly missed by family in the U.K., Australia and Canada.

A private funeral was held at Tom’s request. In memoriam donations to a charity of your choice would be appreciated.

Tom’s long life was enriched by a diverse career, his enthusiasm for learning, and his many personal interests. After an electrical apprenticeship at Harland & Wolff shipyard in Belfast, Tom moved to Short Brothers aircraft company in Belfast.

Meeting Mary Isobel Campbell at a local dance, they enjoyed memorable motor cycle tours around Ireland. Their courtship continued through letters, during Isobel’s extended travel and work stint in Edmonton, Alberta.Tom and Isobel were married in Belfast on June 20, 1958 and  settled down near friends and family.Encouraged by Isobel, Tom subsequently sought and accepted a new position with Computing Devices Canada in Ottawa.The family, now including children Moira, Patricia and Michael, moved to Canada in May 1964 and soon all were citizens.

Later, Tom was employed with the Emergency Measures Organization in Ottawa, and from 1970 to 1991, he worked at the Canadian Police Information Centre in Ottawa, becoming manager in the Technical Information Services Centre before his retirement to Nepean, Ontario.

Tom enjoyed the outdoors, camping, hiking and birdwatching throughout his life. Summer family holidays were devoted to travel and camping throughout the north eastern United States and the Maritimes in Canada.The young family canoed in summer, and cross-country skied in winter. Tom also sailed a small dinghy, crewed by family, for a few years from the Nepean Yacht Club on the Ottawa River.When the children were grown, Tom and Isobel continued their travels together in greater comfort across North America and the United Kingdom.

Tom studied and practiced creative writing and produced lively reminiscences of his youth and experiences in Belfast, especially during World War II. Always a talented artist, following his retirement, Tom devoted much time to painting and drawing.His focus was aviation, and the history of transport in peace and war, including rail and shipping.In the 1990s, several watercolour and acrylic paintings were selected by jury for display at annual “Airflight” exhibitions held at the National Aviation Museum in Ottawa, and these works are now in the possession of family members.

Tom will be remembered by his family and friends for his up-beat humour, singing old songs and quoting poetry.

“ I have lain in the sun
I have toil'd as I might,
I have thought as I would,
And now it is night.

My bed full of sleep,
My heart full of content
For friends that I met
The way that I went.”

From Nimium Fortunatus by Robert Bridges

Share Your Memory of
Thomas
Upload Your Memory View All Memories
Be the first to upload a memory!
Share A Memory